4. Including all types of restraints with a PDB file

5. Including all types of restraints with sequence files

6. When several missing residues must be inserted) ADVANCED!

Things to prepare before using SimRNAweb

It is best to gather as much information as possible before using SimRNAweb to do a simulation. SimRNAweb can do de novo folding and can often solve a short hairpin sequence quite successfully. However, most of the interesting RNA structures are complex. Secondary structure information alone may not be adequate to ensure that a correct prediction is obtained. Therefore, it may be necessary to obtain information on tertiary structure.

The more information is available, the more reliable the prediction will be. Nevertheless, when nothing is known, then the only option is to fold the sequence de novo. It should be recognized that the reliability of such predictions depends strongly on how much information can be assembled beforehand.

In Figures 1a-g, we show various examples of using restraints with sequences and PDB files under various circumstances for PDB id 1L2X.

Note that pseudoknot restraints are expressed by including an additional line with the entangled helix on a second line. This can be done up to as many lines as needed to specify any very deeply entangled pseudoknots. This notation allows clear specification for more than one pseudoknot, as opposed to the usual notation "..(((((..[[[.))))).......]]]". 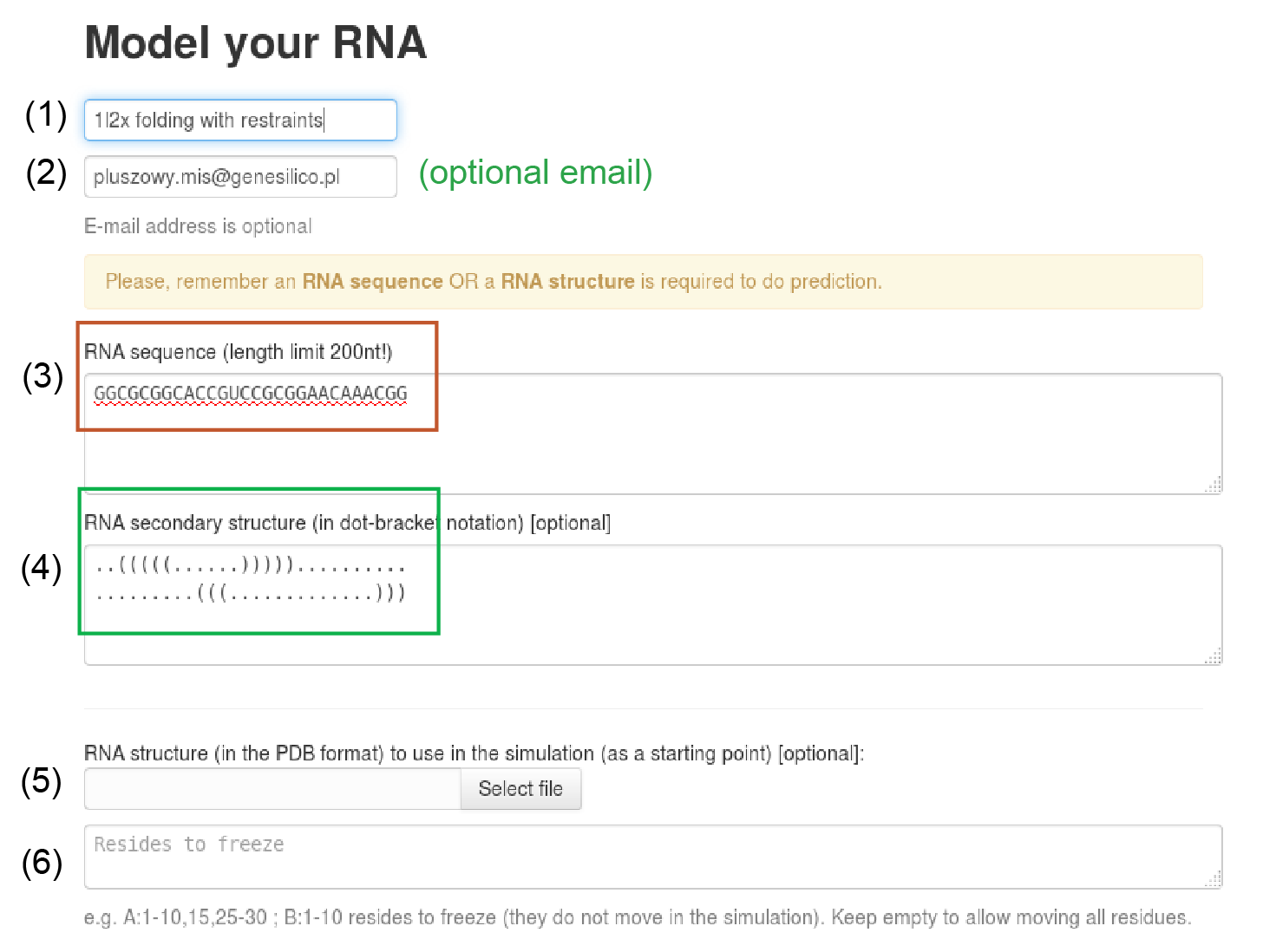 Figure 1b. Submitting sequence along with secondary structure restraints to SimRNAweb.

(6. When several missing residues must be inserted) ADVANCED!

SimRNAweb can be used to add missing sequence in such structures as RNase P (PDB id: 3DHS), Figure 2ab. Here, the PDB file presents a molecule that has incomplete sequence due to unresolved fragments.

First, a full length sequence of the molecule to be modeled must be reconstructed. This task can be achieved e.g. with a text editor by combining the sequence extracted from the coordinates, with the missing parts inserted or appended terminally in appropriate places. This sequence should be split into two chains corresponding effectively to residue ranges 1-81 and 231-417. As a result, all residues numbered 231-417, originally in chain A, shall become a new chain (B), and be renumbered 1-187 (original number minus 230), as sequence input requires the residue numbering to restart from 1 for every chain.

The modeling of missing sequences with SimRNAweb should be executed with the residues from the PDB input frozen, and the remaining residues (added from sequence input) free to fold.

The input data is written in a single line in a basic text file with the sequence of RNA (both upper and lower cases are acceptable). For example:

To have more than one RNA chain as input an input, the user must separate the different chains by white spaces. For example:

If the user wants to provide secondary structure restraints, the contents of the restraint file should be in the following one-line format:

Or, when pseudoknots are involved, several lines can be provided depending on the characteristics of the pseudoknot. For example, if there is only one pseudoknot, then the following is sufficient:

If more than one pseudoknot is involved, each one should be written on a separate line. For example, the following structure would involve two pseudoknots:

The user requests starting the calculation with a structure provided by the user in PDB format.

Essentially, a PDB file is cleaned (water, ions, non-standard residues are removed) with `rna-pdb-tools` to get a file "SimRNA ready". However, these tools simply follow orders (all muscle and no brain). Therefore, it is wise when the user prepares the PDB files to avoid any inadvertent misinterpretation of desired structural information on the part of the automated tools.

Hence, although a fair amount of flexibility is built into SimRNAweb, there are some important caveats to keep in mind.

In SimRNA, distance restraints can be defined for any pair of atoms used in SimRNA representation, as well as to the central point of the nucleic acid base: for pyrimidines P, C4′, N (N1, N9), C2, C4 and for purines P, C4′, N9, C2, C4 and C6 (for purines) and the the middle of the base (label MB).

The restraints come in two basic forms: WELL and SLOPE. A typical WELL restraint effectively "captures" the two beads when they come within a prescribed distance from each other as in Figure 4a, where the penalty is zero when the distance between the orange and red bead is outside of the well, and some negative number when inside the well. This means nothing happens until it finds the hole. A typical SLOPE restraint penalizes any region outside the zone where the penalty is zero as in Figure 4b. 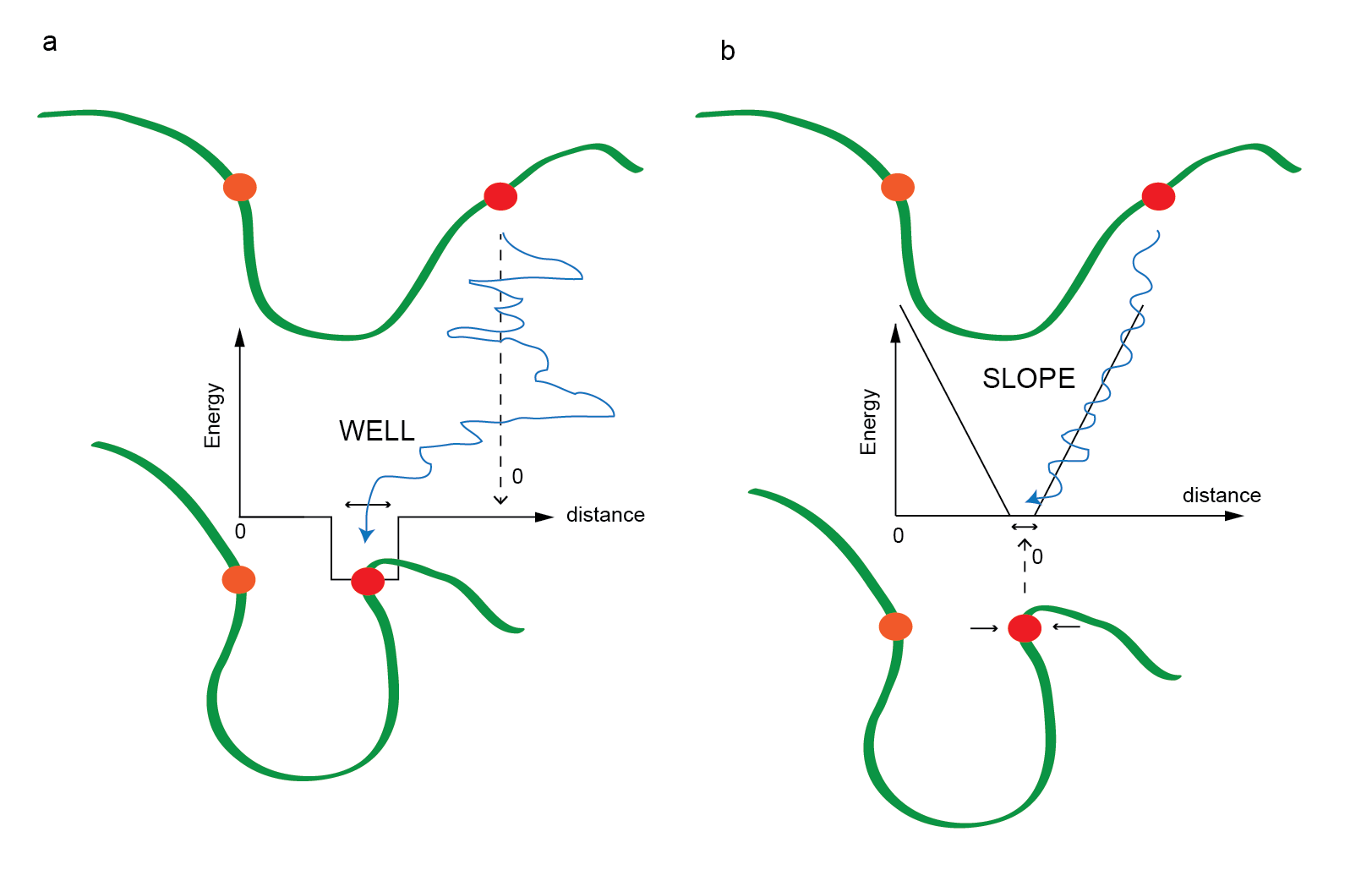 Figure 4. A cartoon describing the way restraints affect the interaction between two beads: here orange is the reference bead and the red bead is shown moving relative to the orange bead. a) A WELL restraint where outside the hole, the red bead moves freely and inside the hole, it is trapped to a specific range. b) A SLOPE restraint where the penalty is zero when the distance between the beads is inside the zone, and outside this, the beads are either pulled together or pushed away.

The WELL restraint is expressed by a single line in the restraints file as follows:

The SLOPE restraint is expressed similarly as follows:

or (alternative for SLOPE):

Example line in a restraints file:

This is an example of a multifunctional restraint that resembles Figure 5e. 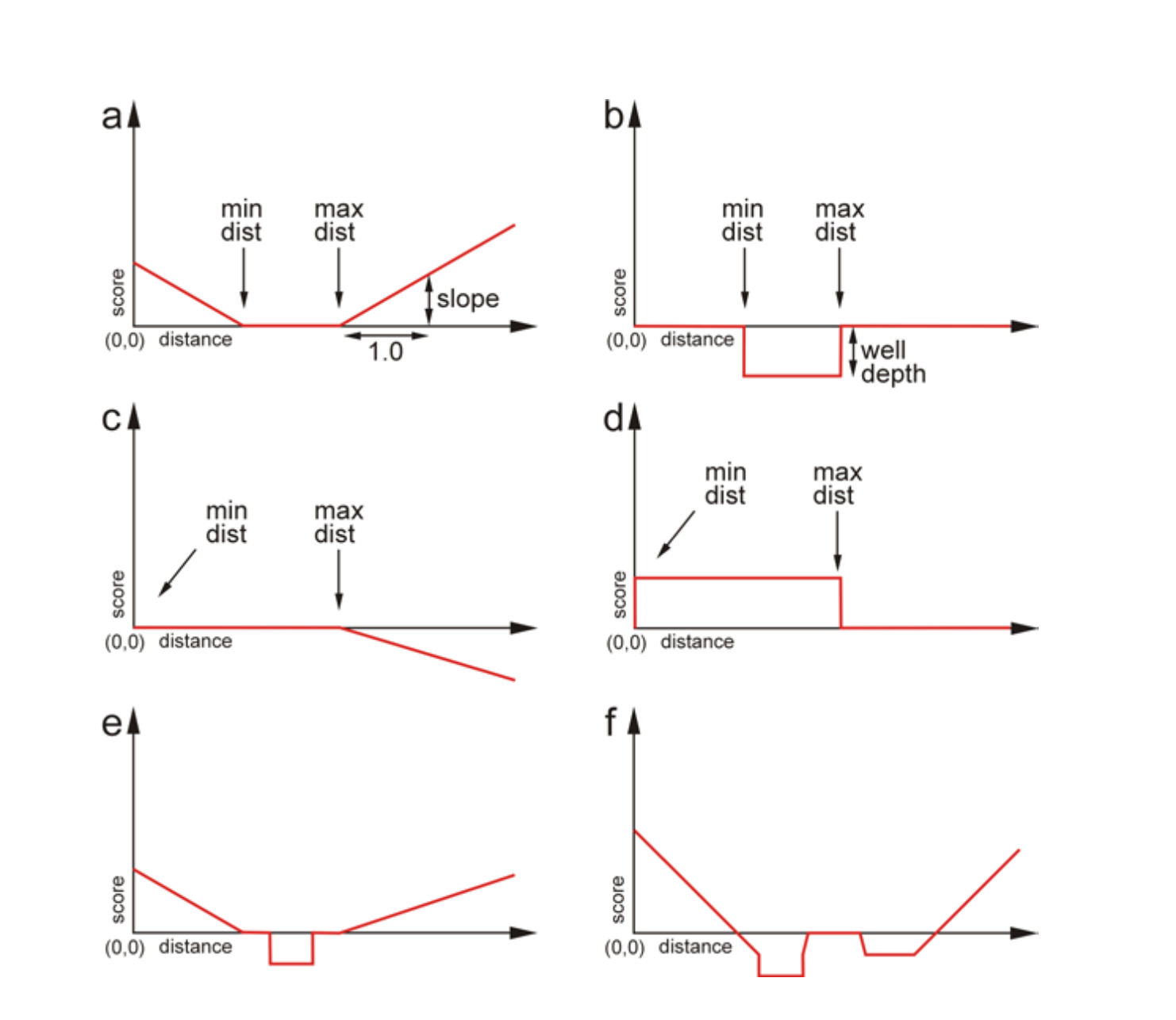 
A restraint can be thought of as a flexible tether that drives the selected atoms towards a certain distance by applying a penalty for distances that deviate from that range. It can also provide a reward when a desired distance is achieved. The penalty and reward are positive and negative contributions to the total energy of the simulated system, respectively.

There are two types of distance restraints: WELL and SLOPE (the keyword DISTANCE can also be used in the place of SLOPE). Both restraints describe an inner zone between the specified minimum number and maximum number (which can be the same number). For SLOPE, the penalty within the inner zone is zero, and all regions outside change linearly with distance by the weight outside this zone. When the weight is positive, the SLOPE forms a "V" shape or a "\_/" shape depending on the size of the inner zone (Figure 5a). If the weight is negative, the shape will be inverted, but the penalty in the inner zone is always zero (for SLOPE). In the case of WELL, a positive weight produces a divot "|_|" where outside the zone, the value is zero and inside the well, the energy is negative (Figure 5a). Changing the sign of the weight for WELL means we create a wall or a stumbling block (a positive penalty) in the inner zone.

The basic forms for SLOPE and WELL, where the weight is positive, are shown in Figure 5a and b.

In the case of a SLOPE-type restraint, the two atoms are tethered towards the region by applying a linear penalty that corresponds to the degree of violation of the distance from the desired region. When the distance between the atoms becomes equal to the desired value, the value of the function reaches zero. The shape of the function resembles a V, with a bottom that can correspond to a single point or to a “flat” region (Figure 5a).

In case of a WELL-type restraint, the function is flat and equals zero for any distance outside the desired range, while the distances within the desired range correspond to the negative value of the weight (Figure 5b).

Both the SLOPE and WELL restraint functions can be “reversed” when a negative weight is applied (c.f., Figures 5c and d). For example, applying a SLOPE-type function with a negative weight can be used as a repelling function (Figure 5c). This function can be useful in simulations in which the user desires to study molecule stretching between terminal residues, for example. On the other hand, the WELL-type function can be applied with a negative weight when the user wishes to define a distance range that the atoms should avoid. When atoms are in the distance range specified by WELL, an additional penalty is applied (Figure 5d).

Any number of these two types of functions can be also combined in order to define complex restraints. The resulting function can adopt various shapes (Figures 5e and f). Therefore, the relative distance of two atoms under consideration can be described by a dedicated function or a linear combination of functions used as a part of the total scoring of the energy.

where examples are provided in the next section. Here, ChX and ChY specify the chain index (chain name can be the same or different), i and j refer to the index of the particular residue on the respective chain, and atom_i and atom_j refer to the atom on which the constraint is applied. Restraints of type WELL are 0 except for the range between min_dist and max_dist. For the region between min/max (min_dist↔max_dist), the value becomes -1*weight.

Restraints of type SLOPE are 0 within the range, min_dist↔max_dist. Outside that range, a linear increasing positive penalty is added (the pair of atoms are attracted to each other because there is less penalty as they approach the region between min_dist and max_dist). The value for the penalty is dist_violation*weight.

Restraints for a given pair of atoms can be combined (added). It requires two (or more) lines to specify subsequent contributions.

For an applied example of using the above described restraints, Figure 6 shows two examples where the secondary structure restraints and distance restraints (WELL and SLOPE) were used to improve the fit of the 3D structure for two tRNA structures. The necessary restraint files and sequence for folding 3L0U are also provided as an example on the submission page of SimRNAweb, where the best structure using this combination of restraints was 6.1 Angstroms RMSD (Figure 6a). Figure 6b provides the requisite files for PDB structure 1EVV, where SimRNAweb produced one cluster with 6.5 Angstroms RMSD.

Job title – letters, digits, and +_-.(), 20 first characters of a title will make a job id so pick something short, sweet, and to the point.

E-mail address – the email address will be used to send results, but is not required of the user. However, for long sequences, the simulation can take many hours, so if the page is lost, there is no way to find it again.

This is a more advanced demo on how SimRANweb can be used to give you a feel of the usability of the server.

To model your RNA sequence of interest (CGCGCAAGCG) using a tetraloop PDB motif taken from the PDB database, first we have to prepare the PDB file. Start PyMOL (https://www.pymol.org/) and fetch a structure 1zih (fetch 1zih).

Remember, it is absolutely essential to examine the PDB file (e.g. with PyMOL), check for missing parts, gaps (or unusual numbering), ions, water, or anything else that looks suspicious.

Note that this PDB structure has hydrogen atoms, please remove them (Action -> hydrogen -> remove). Select the tetraloop ('GCAA') and extract it to a new object and rename this object to set_name 1zih, tetraloop. Since the number of the tetraloop is slightly different than in the RNA sequence, the numbering must be shifted by 1 (the 5th residue becomes the 4th etc) using alter (sele), resv-=1. Note that this PDB file has 10 states, we need only one to use with SimRNAweb. The easiest way to get rid of additional states is to save the molecule to a new PDB file. Now you can use this file to model your sequence.

Now you are ready to run SimRNAweb. Type a sequence, secondary structure and residues to freeze (i.e., residues that should not move during the simulation). upload the file tetraloop.pdb and click Submit!